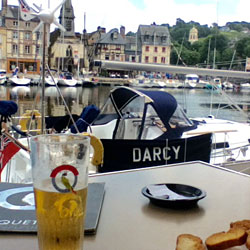 We are in our ninth season on “Darcy” our 35′ Beneteau sailing boat, which we keep in Portsmouth Harbour.

The courses we attended at Trent Sea Training gave us the knowledge and confidence to buy our first boat and set off to cruise each summer. The West Country, Channel Islands, Normandy and Brittany have been our destinations as well as the Solent.

The “Experience Weekends” organised by TST in the Solent, on top quality yachts, and with qualified skippers in charge gave us opportunities to put some of the classroom theory into practice.

It’s not all study though, we found the after lessons trip to a local pub a good chance to find out about opportunities to crew with past and present students, and generally chew the fat about anything to do with boats, motorboats and sailing. 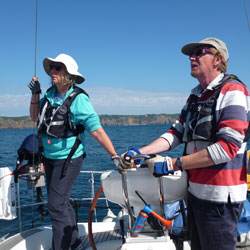 Thanks to Trent Sea Training for the excellent tutoring to gain the qualifications to feel confident enough to make a difference. It has been lovely to get to know so many keen sailors who enjoy cruising and racing.

Through Trent Sea Training we gained the confidence to sail with family and friends to the Channel Islands and the French Coast and very much enjoy sailing on our boat ‘B Natural’ throughout the year, even during the winter months! 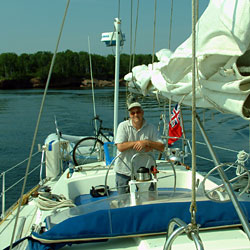 Mike started yacht sailing with TST.  After completing his Coastal Skipper practical and Ocean Theory, plus VHF, First Aid, Radar and Diesel Engine courses, Mike bought a 42′ Moody in Wisconsin, USA.  He sailed her – mainly single-handed – 5,600 miles to Grenada in the Caribbean, taking 10 months to do the trip. He subsequently spent three Caribbean seasons cruising the Windward, Leeward and Virgin Islands.

Mike comments: “There is no way I would have bought Gypsy Dancer or even thought about this voyage if I hadn’t had the confidence, skills and knowledge learned on Trent Sea Training courses. Compared to many other cruising sailors I meet I feel very well trained!”

Mike has since skippered a Baltic 38 racing yacht in Dartmouth Regatta for two seasons and enjoys racing a Flying Fifteen keel boat.

Janet completed her Ocean theory course and has been looking for a boat suitable for her cruising plans ever since!  To tide her over she bought ‘Exocet’ a 38′ X boat with which she raced on the UK south coast and in the Fastnet Race. The yacht was skippered and mainly crewed by past TST students! 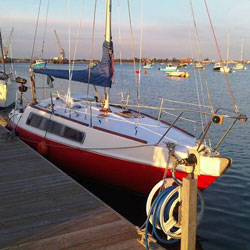 I had done a few sailing holidays crewing for experienced skippers but never dreamed of being a skipper myself. I thought it would be beyond my abilities and way out of my league, until a friend of mine suggested the idea of buying a little boat together for just a few thousand pounds, doing it up and practicing sailing down in the Solent.

This was an initiation into the complexities of sailing!! We tried to sail from Portsmouth Harbour to Cowes several times but the currents, tides and weather kept defeating us every time. Something was definitely wrong, it was then that I decided to join TST.

Little did I know how much that decision would change my life! As I already owned a boat, I decided to go straight for the Coastal Skipper course. It was hard work but with my tutor’s help I achieved my Coastal Skipper certificate. Oh how that was a major achievement for me!! During my course I not only gained the knowledge to master the tides and currents to sail to Cowes, but we also got to sail to Bucklers Hard. I have developed and achieved so much with the help and guidance of TST, plus the added bonus of making a whole new circle of friends.

Trent Sea Training is an RYA (Royal Yachting Association) approved and accredited training school . Joining the RYA gives access to many benefits for all sailors.